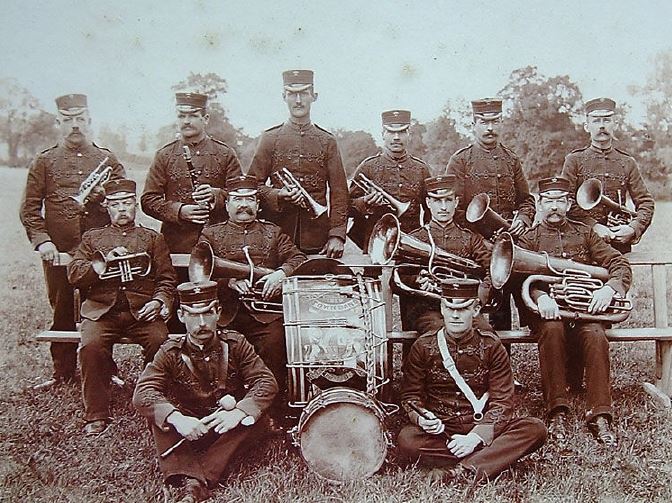 The start of the band

Malmesbury Concert Band, once known as Malmesbury Town Band, has been an integral part of Malmesbury for more than 150 years.It was inextricably linked, for example, with the official opening of the Malmesbury Railway on 17th December 1877 - An ensign flying from the flagstaff in the Cross Hayes served as the rallying point at about 1.45 p.m. for a procession led by the Malmesbury town band which was to march down to the new station for the purpose of meeting the inaugural train. Behind the band marched a great echo throng which included Town Councillors and dignitaries attending in a private capacity. During the evening of the 17th, townsfolk listened to the band playing in the High Street outside the King's Arms, and balloons were sent up from the Market Cross in honour of the day's events. On 3rd June 1882 the first documented Sunday Schools' Special train was run, providing a day trip to Weymouth for a cost of 4/- [20p] per adult, 2/- [10p] per child. Townsfolk were awoken by the town band playing in the streets between 5 and 6 a.m., the train, 23 carriages long, leaving at 6 a.m. and collecting children from various villages at Somerford on the way. [This extract has been taken from the definitive history of the Railway - The Malmesbury Branch, by Mike Fenton]

The Musical Director has compiled a History of the Band to its sesquicentenary in 2009, which can be accessed by clicking here History_6th Edition.pdf (12MB)

It is in no way complete, and anyone who can help to fill in the many gaps is invited to contact Tony Fleming (

The Band was re-formed by Ian Mills as a concert wind band (brass and woodwind) in the 1990s and subsequently built up a number of regular playing engagements in an around the town. He combined the roles of conductor, music arranger, and tour arranger (for visits to Niebul and the Rhine Valley), and his untimely death was a severe setback. After a period of re-adjustment, Barry Dennis took over as conductor for six years, until December 2004, to be replaced by Trevor Batham until September 2007. Until November 2010, the musical director role was shared between Tony Fleming and Bernard Smith and is now exercised by Tony Fleming, who remains keen to widen the repertoire of the Band and to develop its playing standards.